Are you looking for a speaker for a community event or program? Distinguished faculty members in the Fern and Manfred Steinfeld Program in Judaic Studies at the University of Tennessee have expertise on a wide range of subjects and are available free of charge to community organizations within the state of Tennessee. 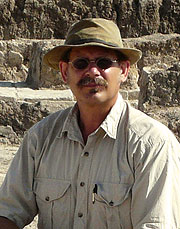 Professor J.P. Dessel specializes in the history and archaeology of the eastern Mediterranean and the ancient Near East. His research focuses on the rise of social complexity, urban-rural dynamics in the Bronze and Iron Ages, and ethnicity in the ancient world. He has participated in excavations in Israel, Turkey, Egypt, and North America Professor Erin Darby is an expert in the Hebrew Bible, ancient Near Eastern history, literature, and archaeology, and specializes in ancient religion and iconography. Professor Darby has been the recipient of numerous awards, including most recently a National Endowment for the Humanities Fellowship for her work at the W. F. Albright Institute of Archaeological Research in Jerusalem.

Professor Marilyn Kallet has published 16 books, including six volumes of poetry, translations, critical essays, children’s books, pedagogy, and anthologies of women’s literature. Among other honors, she won the Tennessee Arts Commission Literary Fellowship in poetry in 1989 and was inducted into the East Tennessee Literary Hall of Fame in poetry in 2005.

Gregory Kaplan, Distinguished Professor in the Humanities and Professor of Spanish Professor Gregory Kaplan's principal area of research is medieval Spanish philology, which includes the literature of the Spanish Middle Ages as well as the history and evolution of the Spanish language. Kaplan’s recent work includes the converso literature of Medieval and Golden Age Spain and the writings of the rabbi to Amsterdam's community of some 1,500 exiled Sephardic Jews of Iberian descent (including Baruch Spinoza). Kaplan has been awarded numerous prizes for his excellence in research and teaching.

Magilow's research interests include Holocaust studies, Weimar Republic, and the history of photography. He is the author, editor, and translator of four books and serves as managing editor of the Journal of Jewish Identities. Magilow has received several awards and grants for his work including a DAAD research grant and multiple grants from the United States Holocaust Memorial Museum. Professor Christine Shepardson studies the history of early Christianity, particularly the Mediterranean world in the period of late antiquity. She is the winner of a National Endowment for the Humanities Fellowship, an American Council of Learned Societies Fellowship, and a Franklin Research Grant from the American Philosophical Society.

Robert C. Blitt is a professor of law at the University of Tennessee College of Law. Among other things, his scholarship   focuses on international organizations, human rights, and issues relating to the right to freedom of thought, conscience, and religion or belief. Prior to joining UT’s law faculty, he spent over five years in the Middle East, where, among other things, he served with the Department of International Agreements in Israel’s Ministry of Justice, clerked for the Chief Justice of the Supreme Court of Israel, and directed projects at Physicians for Human Rights (Israel). In 2002, Professor Blitt was a Rabin Fellow for Peace and Tolerance at the Hebrew University of Jerusalem.

Please contact Helene J. Sinnreich, director of the Fern and Manfred Steinfeld Program in Judaic Studies at hsinnreich@utk.edu to arrange for a speaker.